EPISODE 1 – EXPLORATIONS ON AN ANCIENT SEA 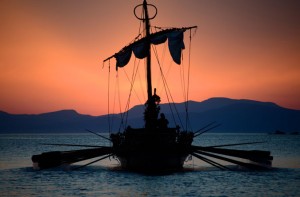 In search of the Alexander’s Lost World, Adams follows in the footsteps of the earliest Greek explorers, putting a new theory on Jason and the Argonauts to the test. Are the ancient accounts correct? Were the Caspian and Black seas once joined, actually making it possible for the Argonauts to sail to the East?

Aboard a replica of the Argo, David embarks on an epic journey that will take him from Greece across half the earth and in to war torn Afghanistan. In Russia David discovers the Phasis River, the waterway that led Jason to ‘The land of the Golden Fleece’ and onto the Caspian Sea where Alexander planned to created a great canal to connecting it to the Black Sea.

Then, guided by desert horsemen, he enters Alexander’s Lost World in search of the mysterious River Oxus that according to the Ancient Greeks once flowed into the Caspian, transporting riches all the way from India. In the desert wastes of Turkmenistan he discovers the ruins of a magnificent 4,000 year old city and startling evidence to suggest that the reports of the Ancient Greeks were correct; in their time, earth’s climate was radically different than today.