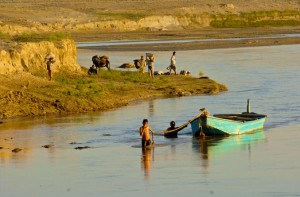 Crossing back into Afghanistan, Adams continues his search for Alexander’s Lost Cities. Lost in a sand storm in the desert, he and cameraman Greg finally reach a remote police outpost in the Taliban held Kunduz delta.

The police take him deeper into the delta to the vast fortress known as Qy-i-Zal, believed to be one of Alexander’s bases. Here, he makes an incredible discovery.

But still on the horizon is one of the only Greek cities ever found in Afghanistan – Ai Khanoum. Beset with obstacles, broken bridges, flooded rivers and the constant threat of Taliban roadblocks he finally reaches his destination. Ai Khanoum – the city of the Moon Lady – spreads out across the plain, a whole Greek city lies in the dust. But was it the once magnificent Alexandria on the Oxus? With the help of the local Afghan General, Adams uncovers the truth behind the legend of Alexander and his cities – and out on the plains he discovers an even more astounding revelation.