EPISODE 5 – THE LAND OF THE GOLDEN FLEECE 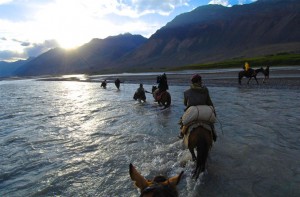 In the waters of the Oxus River Adams discovers a surprising connection to Jason and the Argonauts – could they have possibly travelled this far from Greece?

David explores the riches that had drawn Alexander and the Greeks, following the ancient trade route deep into in remotest Badakshan to discover more of its ancient civilization. Deep in the Hindu Kush, on the borders of hostile Nuristan, David reaches lapis lazuli mines that supplied the precious blue stone for Tutankhamun’s funeral mask.

For 7,000 years they have given up their riches – extraordinary evidence that this lost world was once connected to the west. On the Pakistan borders, David meets with the fabled ‘Children of Alexander’ and determines – once and for all – Alexander’s relationship to them. When the road turns to river and rubble, he finds the remains of other invaders and their unexplored citadel – Chinese and Tibetans who just like Alexander once fought for control of the trade routes in an epic battle of 20,000 men.