EPISODE 3 – Alexandria on the Oxus 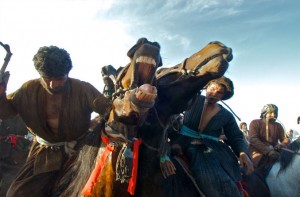 Did Alexander really build sixteen cities in Afghanistan and Central Asia or was he the destroyer of a far more ancient civilization? Adams goes in search of the most alluring of them all – Alexandria on the Oxus.

On patrol with the German army David moves over the very same ground as Alexander. At a festival celebrated long before Alexander’s time he joins Mullahs and Generals to witness the war game of Buzkashi.

In search of the fabled city, David travels along Alexander’s route of conquest through Uzbekistan and Tajikistan to unearth Alexandria on the Oxus. He then crosses the Oxus River in the same manner as Alexander’s men, building a goatskin raft to ford the vast river. With an eccentric archaeologist Adams explores an excavated city, discovering the truth about the marriage of Alexander to Roxanne.

Travelling with the Tajik army, he gains entry through the border defenses of the former USSR to reach what many believe is Alexandria on the Oxus. But is this really the fabled city or does it lie back across the Oxus River in Afghanistan?